Going through a tiny box of my father’s effects, I was shocked to come across this ring (see pic), my mind immediately catapulted to somewhen around 1964. We were staying in a B&B at Totland Bay, at the western end of the island. The proprietors, a Mr and Mrs Scott, had a mulberry tree in their garden.

Just down the hill, was a small shop that, besides selling groceries, had a few touristy things – including a tray of rings. I blew a good portion of my holiday savings, paying 1s 3d for it (approx. 7p) – having gone back time and time again to look at it, before committing my money. At what point it left my possession, I have no clue. That my father kept it astounds me. It is still a pretty ring but, of course, not worth anything except for the evoking of memories. 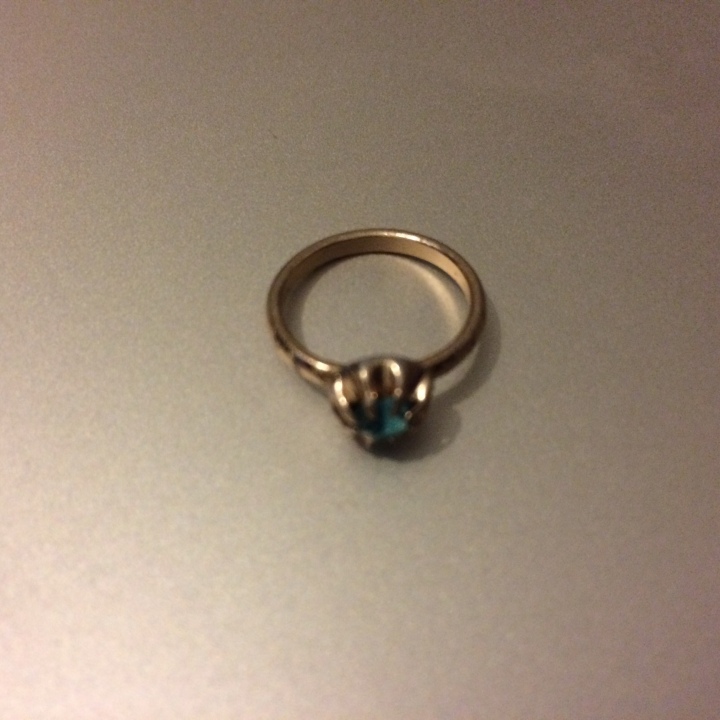 On that same holiday we walked Tennyson Down, my mother bought a glass lighthouse filled with the coloured sands of Alum Bay and I began reading ‘proper’ poetry. We visited Carisbrooke Castle and various picturesque spots on the island. Freshwater Bay was a particular favourite. The Freshwater Bay Hotel being somewhere my father would later take groups of schoolchildren on month long geography field trips, from landlocked Oxfordshire. Perhaps we had gone there so he could reconnoitre the place or, perhaps, when searching for a suitable location for such trips he remembered the landscape and its features and made the arrangements.

It was on the beach at Freshwater that my mother liked to sit, on a towel, on the sands. She was not a slim woman but wore a form of bikini, that we might now call a tankini. It was a deep orange with black spots the size of ping pong balls. Her hair was a tad longer than short, was very dark and framed her gentle face in soft, natural, curls. I can still picture her, there on the beach. Sadly, there are no photographs or not that I’ve found.

My grandmother accompanied us on the holiday: I remember my father being cross when she collected the plates up after dinner, to save the staff a job, although I don’t remember her ever coming to the beach. I think she preferred to sit under the mulberry tree and drink tea. She was a gossip, so goodness only knows what stories she shared with the other houseguests or even the staff. I do remember the Scotts to have been very kind to me and I suspect that had something to do with Nanna.

Beyond this, the holiday seemed fairly normal, in that there were no ‘mother moments’ even though she often hived herself away in the bedroom and it was just me and my father who went exploring. This was one of four of such holidays that I remember. There is, however, another memory from this sojourn that scored itself in my mind.

The day was sunny and my mother had ensconced herself on the beach. I can envisage the towel she lay on, as Dad and I made our way over to the arch rock. This was a distinctive geographic feature, since eroded by the sea. We walked on the blocky rocks to reach it, then went on further. He kept an eye on the tide and we duly returned to my mother all safe and sound. Hot, my mother wanted an ice-lolly and my father went off to get it. I went into the sea.

There were plenty of other people in the water, including a man and his son who seemed good swimmers. As a member of a club I spent many hours swimming each week, and sitting on the bottom of the outdoor pool holding my breath for as long as I could; I felt confident in the open sea, enjoying being buoyed up as each wave came in.

The boy and I egged each other on: feeling the freedom of swimming away from the less brave, we were knowingly out of our depth. I remember waving to my mother who waved back, before turning away to toast her other side. The boy and I were swimming around each other and laughing. His father was nearby.

In a new challenge I turned to swim out further, but saw a huge wave coming in like a wall. After shouting an alert to the others, I watched in awe as it crowned above me, the height of a house, curling down towards us. The force of it was already pulling me in towards it. There was nothing to be done. I couldn’t outrun it. Taking the biggest breath I could, I tucked myself into a ball.

I felt the water taking me down through gravel and sand. My back and right leg were grazed along on the bed. I was tumbled over and over and over. My lungs were bursting and still it went on. I could hear rushing and roaring in my ears, but all else was eerily silent. Then the tumbling stopped.

Disorientated, I opened my eyes and saw difused light, which I reckoned to be sky out past the surface. I swam up towards it. Breaking through, I gasped breath, not a moment too soon. Then again. Allowing myself to float starfish style, for several minutes, I finally found the strength to swim back towards land.

There was no-one else to be seen in the water. When I tried to stand, back near the shore, my legs wouldn’t hold. Two people came and helped me on to the beach. They asked if I was okay and, reassured, let me go. As I reached our patch of towels, my mother turned back towards me and smiled. Then my father arrived with two different ice-lollies and an ice-cream. He’d had a look in the little church, which was why he’d been so long. I chose the strawberry Mivvi, the best of both worlds, but sat shivering wrapped in a towel as I ate it.

I didn’t tell my parents what had happened, not then or later. If I had I’d have been in for a good telling off – but I always wondered if the boy and his dad had made it. They were nowhere to be seen on the beach – for the rest of that afternoon, nor whenever we went back that week.

note: I have vague recollection of my brother being with us, as my father and I walked to the arch rock, but no other memory of him on that holiday. He was not a swimmer, however, and more likely to be found fishing from some outcrop than languishing on the beach. He would have been about 16; I was about 9

Follow Shards from a Long Cracked Mirror on WordPress.com

One Chance to See the World

The Art of Blogging

Poetry that purrs. It's reowr because the cat said so.

Change a classroom into the place of knowledge transfer

Musings and books from a grunty overthinker

Smile! You’re at the best WordPress.com site ever

the easiest way to discover your next favorite blog

Blurring the lines between poetry and prose

writes one short story every week

Adventures in Poetry and Prose

'the writing life of Amanda Garrie'